The mission trip that almost wasn’t. 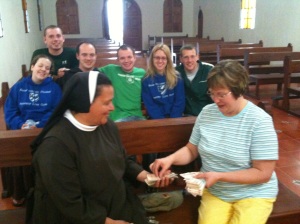 The 2011 Holy Sepulcher  Guatemala Mission trip was scheduled May 26 through June 2. To make things interesting, and to save about $400 per airfare, Brenda Hartzel and I decided to drive from Pittsburgh to Washington DC and fly from there. A business trip to Oklahoma City needed to be scheduled  on the 24th and 25th so even if things went well I was going to be tired. Things did not go well.

My flight to Oklahoma went through Dallas, Texas and May 24th was the day that tornados hit both Oklahoma City and Dallas. My flight left Dallas shortly before the bad weather hit there and somehow we flew on the back side of the tornado. Out the left window I saw clear skies and out the right I saw nothing but severe thunderstorms.

Although there was loss of life and great damage my meetings were held and the next day, the 25th I was in the Oklahoma City airport headed for home back through Dallas to

Pittsburgh so that Brenda and I could drive to DC to meet up with Bob Waruszewski’s  crew from St. Vincent College and then fly back through Dallas to Guatemala City.

What could be easier and what could possibly go wrong? …  What went wrong was that much of the American Airline fleet was on the ground in Dallas when the storms stuck. Baseball sized hail knocked many planes out of service and the 2011 Holy Sepulcher Mission Trip into jeopardy of being cancelled. I spent literally hours on the phone the afternoon of the 25th, re-booking flights then re re-booking flights as the extent of the damage to the airplanes became clear. Bob Waruszewski, in Pittsburgh, was on the phone for hours too, doing the same. Through it all the reservations staff at American Airlines performed splendidly. One staffer, Dede Bowmar, is worthy of special praise. Reservation specialists were all dealing with thousands of stranded and distressed travelers and yet Dede chose to stay late by more than an hour just to make sure that our mission group would be able to travel together with minimum itinerary disruption. She got approvals, routed and re-routed flights, arranged refunds where appropriate and so forth. As things turned out she was one of many heroes and heroines who saw to it that we made the trip.

We ended up traveling through Miami instead of Dallas and arriving Saturday rather than Thursday. Friday night was spent in Miami. John Mark Kahldahl and his parents, residents of Miami, picked everybody up at the Miami airport and drove us to the MorningStar Renewal Center of the Archdiocese of Miami. The Kahldahl’s went to  dinner with us Friday night and drove us back to the airport in the morning. John Mark served in Net Ministries with Dan Waruszewski, traveling the USA working to ignite the faith of Catholic youth. Most of us took advantage of perpetual adoration, offered at the parish adjacent to MorningStar. The kindness and generosity that we experienced in Miami were breathtaking.

We lost time money and sleep. Others lost their lives. By Saturday morning we were finally on our way to Guatemala, once again, blessed by the grace of God.